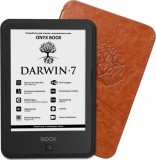 If you'd rather not travel with a high-end tablet and think that even a Kindle is too big to carry on the daily commute, the touchscreen Kobo Mini could be the e-reader for you. At a mere five inches across the diagonal, it's the tiniest e-reader we've seen since the Sony Reader Digital Book PRS-300, though it's not the slimmest. At just a ... Читать дальше

This, the smallest e-reader on the market at around 5 inches, is gadget nirvana for book-loving commuters. The secret is in its size, which is carefully judged to fit into a handbag, a chest pocket of a shirt, or even the back pocket of a pair of jeans. Design Built around a E Ink screen with a 600x800 resolution and 16-level greyscale, the Kobo ... Читать дальше

Kobo Mini review: does the world need a smaller e-reader?

While tablet and smartphone manufacturers battled it out over screen sizes, e-reader makers seem to have settled on an industry standard of 6-inch displays. It's a trend that Kobo, at least, is trying to buck. The company is supplementing its flagship device with a smaller model, the $79 Kobo Mini, which has a more diminutive 5-inch screen, and ... Читать дальше

When we first saw a prototype of the 6-inch, touch-screen Kobo Glo and its built-in ComfortLight a few months back, we asked a simple question to its makers: why didn't anyone think of this idea before? As it turns out, they did – you only have to check the subsequent Kindle Paperwhite and the Nook SimpleTouch with GlowLight for proof of that. ... Читать дальше

It may sound like something to do with discrete illumination in a toilet bowl, but the ComfortLight on the Kobo Glo brings the e-reader bang up to date. In fact, with the arrival of the Kindle Paperwhite, it seems that Amazon thinks that backlighting is really the only way to sell e-readers. Barnes & Noble is following suit by selling the Nook ... Читать дальше

Kobo looked to take some of Amazon's thunder by announcing a couple of new e-readers and a 7-inch Android tablet just before Jeff Bezos took the stage a couple of weeks ago, and now we've had a chance to try out the new devices for ourselves. The Canadian company has a tall task in convincing consumers to consider their products in the face of ... Читать дальше

Kobo Glo review: another illuminated e-reader lights up the market

There's nothing like a good underdog story. Aside from last year's failed Vox tablet, Kobo has made some quality devices, but has still failed to make a huge dent in the e-reader market -- a space dominated by Amazon and Barnes & Noble. In the case of the Glo front-lit e-reader ($129), Kobo might just be hampered by unfortunate timing. Though the ... Читать дальше